Search for the Saint’s Hand 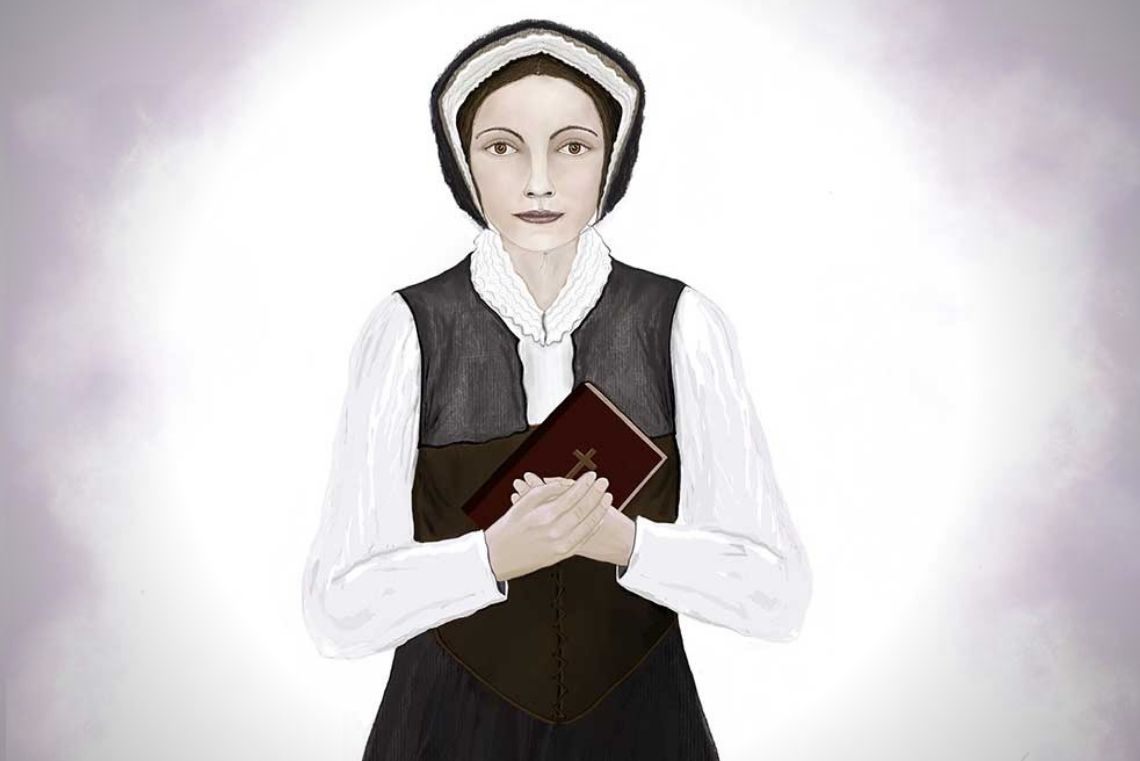 This articles dates from 1997, long before Bar Convent publicly acknowledged that they were the guardians of Saint Margaret Clitherow’s relic. Through the efforts of my research and others, the hand is available to view.

This article contains: hide
Daughter of a Wax Chandler
Margaret Clitherow’s Relic
The Guardians of the Relic

For six hundred years one of York’s most powerful catholic relics, the hand of the martyred saint, Margaret Clitherow had disappeared. Her house in the Shambles is one of the most visited Catholic shrines in England, we wanted to know what happened to the relic and if it still existed today. Before we set out on our researches we first decided to find out more about the saint herself.

Daughter of a Wax Chandler

Born as Margaret Middleton in 1556 in York, she was the daughter of wax chandler, Thomas Middleton, and brought up as a protestant.

At the age of 15, in 1571 Margaret married widower John Clitherow who was a prosperous butcher with two sons. They married in St Martin-Le-Grand Church in Coney Street and in 1574 she became a catholic. William Clitherow, her husband’s brother was a catholic who is believed to have influenced her to convert.

Margaret would often help her husband in their shop, while at night she was playing an active part in helping and sheltering priests in the city. Many of the priests came from Douai in France but catholics were under persecution in England and Mass was celebrated in secret.

Punishment was extreme and a priest could expect a traitor’s death if caught. This led to priests moving from location to location to avoid being caught, often placing their lives in the person giving them shelter. Margaret was aware of the danger she was in and the risks involved, but continued to hide priests. She was arrested many times under suspicion but no evidence was found.

The law soon caught up with Margaret and in 1586 her home was raided, the priest escaped but Margaret was arrested and never saw her children again.

Margaret was put before the Judges at Guildhall and she was charged with harbouring Jesuit and seminary priests and with celebrating Mass. Her friends and relatives fought desperately to get her released because she was pregnant but this failed.

On March 25th 1586, Margaret met her death at the tollbooth on Ouse Bridge. She was to be pressed to death by laying a door on her and placing heavy stone on it.

She was laid on the ground, a sharp stone beneath her back, her hands stretched out in the form of a cross and bound to two posts. Then a door was placed upon her, which was weighted down till she was crushed to death. Her last words during an agony of fifteen minutes, were “Jesu! Jesu! Jesu! have mercy on me!”

Tracing contemporary resources and references, what follows is unusual.

Allegedly, Margaret requested to be executed naked and after death, her body was taken to a heap and dumped. It was left to rot.

However, a few York Catholics one night carried away the body and into the history books, since no one knows where the body was interred. Contemporary reports state that before the body was taken away, whether for a souvenir or as a Catholic relic, her right hand was severed from her body.

A few veiled references to her hand appear in various manuscripts. One states how her hand had been used during a closed ceremony celebration of Queen Elizabeth I’s death and how another time it could be seen in the Old Black Swan on Coney Street. The relic was definitely known about in central York, less than a hundred years after her death but could it be traced to the present time.

The Guardians of the Relic

We first thought we would check local Roman Catholic religious centres and institutions to see if they knew if the relic existed and its present-day location. Our first stop was the University of York’s Roman Catholic Student’s Group, who surprisingly had not heard of the important relic and even if it had existed! We even contacted a number of local Roman Catholic churches who have to remain anonymous due to legal reasons, and they too denied the existence of such a relic and suggested that it did not exist at all.

Our real breakthrough occurred during researches in the York Central Library while looking for a totally unrelated story. I found an article about the movement of a relic from a church North of York to St Mary’s Convent in York in the late 1700’s. Could this be the lead I needed?

Although not known as St Mary’s Convent anymore, The Bar Convent is an elegant Georgian building with a neo-classical chapel with original features reflecting the penal days in which it was built. Catholic worship was forbidden, so the Chapel’s dome is hidden from outside view by a pitched roof; eight exits provided escape routes for the congregation in the event of a raid by magistrates and a priest hole offered further safety.

My gut feeling was that St Margaret’s severed hand resided at this chapel.

It was a rainy day during our honeymoon when we visited the Bar Convent. Not knowing if the relic would be on show we toured the fascinating museum but it wasn’t to be found.

A tall old gentleman stood in the corner, he was a guide for the location – may be he would know?

I plainly asked him if the relic of St Margaret was housed in the Chapel? At first he looked shocked and then smiled. I told him of how I had tracked down the history of the hand and how it seemed to disappear in the 1640’s, something of which I found to be a mystery.

As we walked up the stone grey stairs of the convent, leading to god knows where, the guide told us the history of the relic. Indeed I was right that it had been taken and was often shown on public holidays and celebrations but it came in to possession of the convent by their founder Mary Ward.

Mary was a little over one year old when Margaret Clitherow died, and she had her own catholic mission. It was Mary Ward’s intention to found a religious congregation for women who could be actively involved in the apostolate serving the Church when and where needed for the greater honour and glory of God.

In the 1620s Mary Ward established schools in Rome, Naples and Perugia. Mary died near York in January 1645 having failed to get her Institute recognised and confirmed by Rome. This confirmation was not given until 1877.

It was during the 1640’s that by chance, Mary came into possession of the relic and bequeathed it to the Institute of the Blessed Virgin Mary, which she founded. Since then it disappeared from the history books and out of sight of the public.

We walked into the neo-classic chapel which was simply breath-taking in architectural and religious beauty. A small wooden panel was revealed and the guide inserted a large gold key into the keyhole, as he opened it we saw the red of the velvet interior and inside was the relic.

Standing approximately 2 and half feet, the hand was encased in a glass ornate dome with ornate silver work around it. It was simply stunning. As you can see by the photograph (right) it is a fantastic piece of workmanship, and the hand itself is remarkably preserved. The guide also told us that its believed the hand has healing powers and from time to time it has been used to cure the sick.

Since our discovery in 1998 the convent has made public its relic and many websites now mention its location, allowing a new generation to see this amazing relic but hardly any will know of its disappearance for over 400 years and its subsequent re-discovery.