Dramatic and often short lives were lived by some of Lancashire’s most powerful and religious families. In the face of adversity of religious persecution or for just downright Love, these families are known as much for being haunters and less of the haunted.

The Walls of Chingle Hall 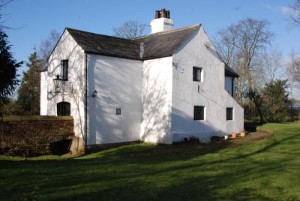 Just off the Goosnargh to Whittingham Lane, is one of the most haunted and wrote about houses in Lancashire, Chingle Hall is a cross-shaped house, it was built by the de Singletons about 1260, surrounded by a moat and approached over a low bridge.

The Singletons lived in the Hall until 1585 when an heiress married into the Wall family. Here the family lived and in the room over the porch a son was born, destined to be St John Wall. Life in his childhood was difficult, the Walls being Papist and compelled to send John to Douai for his education by the Jesuits.

Years later he returned, as a Franciscan missioner. He moved around the West Midlands and was eventually executed at Worcester in 1679, becoming a martyr. His severed head disappeared allegedly secretly returned to his birthplace.

The ghost of a male cloaked figure is often seen in the birth chamber of St John Wall and the door has an unnerving habit of opening and closing. The figure has been witnessed crossing the bridge, entering the porch and ascending the stairs and manifesting its presence by rappings and tappings. Often it causes flowers to shake in their vases, pictures to dance on the wall and the occasional dislodgement of objects.

The hall also has strange currents of air – icy cold breezes in warm rooms and smoke issuing from unexpected places.

Recent investigations of the Hall by the BBC were unsuccessful, for whatever reason recording equipment refused to work but a tape recorder captured approximately sixty seconds of anomalous screaming from the Hall.

The Southworths of Samlesbury Hall
The ghost of Samlesbury Hall is that of Dorothy Southworth, the daughter of an “Obnoxious Papist Family” as described on the official roll call of Papists in 1590’s. Samlesbury Hall was always under close surveillance by the government, often searched for evidence of forbidden masses and hidden priests.

Dorothy’s tale is that of forbidden love – a love affair with the son of a protestant family. She was due to elope with her love when her brothers discovered her treachery and promptly killed her love and his friend. In the 1820’s the remains of two men were unearthed during road making near the Hall’s moat.

Dorothy, heart-broken and maddening with grief was sent to a nunnery, where she died.

Since her death, a White Lady appears near the Hall often stopping passing motorists of the A59. She also appeared to an Amateur Acting Group performing nearby! Her activities include visiting the caretaker’s house often appearing next to his bed. Dorothy being on of the most busiest ghosts, also walks along a path between the Hall and the road, one night during World War 2, two soldiers saw her – causing one of them to faint and the other run!

The Osbaldestons
Less than two miles from the Southworths is Osbaldeston, the name of the old family who intermittently carried feuds with their neighbours at Samlesbury Hall. Both families were Papists, but the Osbaldestons held relations with Queen Elizabeth I and the Southworth’s were not happy about this.

In 1593, Edward Osbaldeston returned to Lancashire after tuition from Jesuits, as a missioner. Unfortunately, he was soon caught and executed. His brother, as head of the family mended the feud with the Southworth family by marrying his son Thomas to a Southworth daughter. After this happy event, followed a tragic one.

Thomas’s sister Elizabeth had married Edward Walsh, even though Thomas disagreed with her choice of partner. We do not know the source of their differences but one night when Edward Walsh returned home, he was involved in a duel with Thomas. Both fought in the room where they quarrelled and both swords were drawn. Walsh fell to the ground with blood gushing from a deep chest wound.

The blood soaked into the floorboards as he laid dying, and to this day no amount of washing or scrubbing has ever been able to remove the stain. If you visit Osbaldeston Hall today the mark still remains!

A ghost often appears, moaning and exposing the wound while staggering through the hall.

The Norris Family of Speke Hall
The Norris family built their mansion eight miles from the then tiny fishing village of Liverpool in 1490.

Little did they realise that 500 years later their home would be surrounded by a modern industrial estate and Liverpool Airport. By 1612 the house had been extended to include a central courtyard, a Tudor Great Hall, richly plastered ceilings, fine carvings and a moat. The Hall stands in a wooded park by the Mersey.

Speke Hall is a magnificent mansion grouped around a courtyard where two 500-year-old yew trees called Adam and Eve flourish.

For many generations the Norris family lived at Speke Hall. In penal times so much activity took place here due to this being a convenient spot for the reception of returning Jesuit missioners and priests. A lot of ghost activity should occur at Speke Hall, but it only has one ghost, that of the last Norris, an heiress called Mary.

Mary had married the younger son of the Duke of St Albans, a descendant of Charles II and Nell Gwynn, but he was a no-good person and was a spendthrift.

Driven to madness by her husband’s behaviour, she snatched her baby from the cradle and, not knowing her actions, hurled the infant from the window of the tapestry room into the moat below. In that haunted room the cradle gently rocks and no hand is visible. Mary Norris ended her own life in the Great Hall downstairs, set to wander Speke Hall for an eternity.