10 Most Haunted Places In Bedfordshire 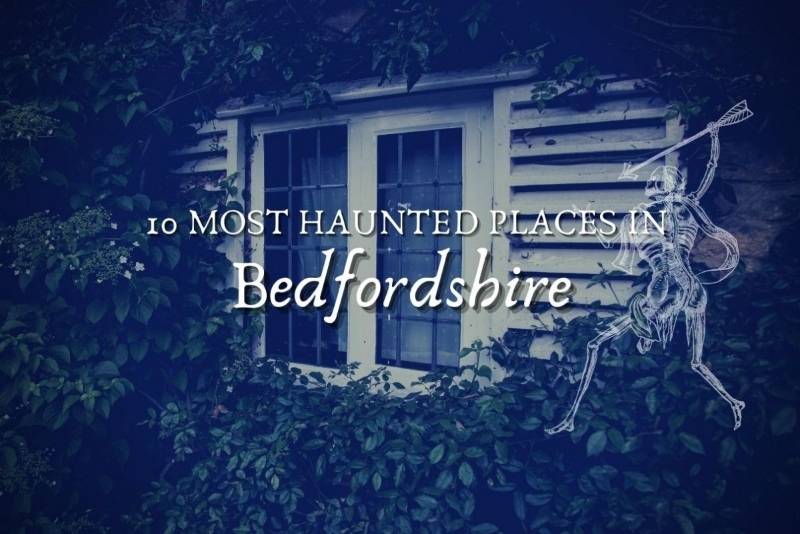 Bedfordshire may be one of the quietest parts of Central England. While perhaps lacking in marketable landmarks and dark, creepy places,  steeped in history as it is, Bedfordshire is home to a surprising number of ghosts and supernatural manifestations.

When ‘Black Tom’, an 18th  century highwayman, was caught and sentenced to death, a petition was signed asking for him to be pardoned. A jailer withheld the plea and Tom was hanged where the Tavistock Street, Union Street and Clapham road roundabout is today. Having joked that he would return to finish a bottle of wine offered him on his way to the gallows, he was buried there with a stake through his heart to prevent his return!

Tom, though, has been frequently seen with his head hanging, unsupported by his broken neck. Sometimes motionless, sometimes stumbling around, on one occasion in the 1960s, he was seen during the day by many witnesses.

Driving home after a darts competition in October 1979, Roy Fulton stopped to pick up a pale-faced young hitchhiker just outside Stanbridge. The casually dressed man got into the car and when asked where he was going, simply gestured further along the road.  When Roy turned to offer his quiet passenger a cigarette, the boy had vanished and Roy was alone in the car. Completely spooked and white as a sheet, he drove to his local pub and since then, has never wavered in his story.

In the grounds of Ampthill Park stood a once-grand castle constructed in the early 15th century. In 1524 the castle came into the possession of King Henry VIII. With its 11 tower and huge great hall (200 x 170 feet), it would have been one of the grandest castles in the South of England. During his divorce with Catherine of Aragon, Henry sent her to live at Ampthill Castle but just two years later the castle had fallen into decay and demolished before 1649.

In 1773 a cross was erected on the site standing in honour of Catherine, and nearby a second cross was built by the Duke of Bedford to commemorate the death of 700 local soldiers in World War 1.

Although the castle no longer exists, a knight in full armour on the back of a regal horse has often been seen emerging near Catherine’s cross and riding to the stream, where he vanishes.

While there has been no explanation of this ghost, but I believe it could relate to the case of poor Sir Nicholas Hervey of Thurleigh who was sent to Ampthill Castle to obtain an annulment from Catherine. Sir Nicholas was an ill man, and he was kept for a considerable time waiting for an interview with Catherine. The illness combined with the stress he was facing no doubt had a bearing on what happened next. The interview with Catherine was long and wearying, and didn’t come to a satisfactory ending for either parties. As he left the Queen’s room he stood at the door and succumbed to heart failure, or in some reports, ‘sweating disease’. Sir Nicholas Hervey’s remains repose beneath a brass of a Knight in Full Shining Armour in the North aisle of nearby Ampthill Church. Could the ghost in full armour be the spectre of Sir Nicholas – or at least a 16th century urban legend centred around Sir Nicholas’s unusual death at the castle?

In the early 1990s when the house was converted into a hotel, builders discovered a door to a hidden room with a sealed-off entrance to the rest of the house.  Since then, the ghost of an elderly, white-haired lady has often been seen. Guests wake to find her standing near their bed, staff encounter her in the hotel, eerie footsteps are heard and people describe feeling watched. Said by some to be angry, others claim she was crying and had an incredible air of sadness. The description matches that of Mrs Banks, housekeeper to the Lyall family. One of their children mysteriously fell mortally ill and accused of poisoning him, although not proven, she was sent away and her rooms walled up.

Many inns doubled up as mortuaries in the past and The King’s Arms trap-door above the bar is the right shape for coffins to be moved between floors.  Surprisingly, it’s haunted two ghosts, firstly by a young ghost on the ground floor and, secondly, recorded as recently as 1994, an elderly gentleman in a white, short-sleeved shirt in the cellar who cleans down the beer taps.  Supernatural forces have thrown antiquated nails across the bar at shocked customers.

When used as a hospital in World War I,  a woman in grey was often seen by nurses and patients. In the early 1970s, two engineers working on the museum heating system late at night saw a lady in a long, dark dress with keys at her waist, who then disappeared.  The next day, it was established that no one else could have been there. Seen several times, it is said she was a Victorian housekeeper who threw herself into the river after an unhappy love affair.

Once home to the U.S. 306th Bombardment Group, which had one of the highest loss rates between 1942 and 1943, the officer’s mess is reputed to be haunted by at least one American airman. The goings-on has involved light bulbs dropping out of fixtures, doors opening and closing, footsteps echoing in empty corridors and ‘other’ presences.

Robert Allen is a volunteer and the curator of the Aviation Museum. For the past six years, he and his team have spent many hours working on the restoration of the old RAF buildings and during this time, they have witnessed some very strange things, which prompted him to want to research the existence of paranormal activity.

Robert Allen told the BBC some of the things he has seen over the years,

Odd things started straight away. There was always an atmosphere, you always felt like you were being watched and we’d be working away and you’d see somebody appear at the door like a black shadow and you’d turn around and it would vanish.

In the old flight office buildings, two of our members were walking down the corridor on a winter’s evening to collect something and they didn’t bother to turn the lights on.

As they were walking, a ball of blue light, about the size of a football, came shooting down the corridor and went into an open doorway. They said we wouldn’t believe what they’d just seen, but then we started hearing footsteps down the corridor even though the doors were locked, you’d wait to see someone and nobody would appear.

Since the early 1970s, a pretty young girl in a long dress has been seen in the South Wing.  Nurses have observed her gliding into the toilets, only to find nothing but a distinctly cold chill when they entered. Other staff have seen a similar phantom go straight through a wall. The footsteps of an elderly person dragging their feet have been heard – on a young people’s ward.

Built on the site of a priory, this cinema offers spooky experiences, mostly in theatre 4 and the toilets. A ghost in a hooded robe has been spotted by people in the foyer, too, and there is even a story of a monk staring out of a mirror. Clinking chains and eerie scratching sounds have been heard, but more unnerving are the sudden and inexplicable low temperatures, the apple cores and sweets eerily pelting cinema cleaners and the hands that stroke people in the audience.

Built on the site of a Saxon hamlet before becoming a Cistercian Abbey, unsurprisingly, several well-documented monk manifestations exist. One was clearly seen standing outside the sculpture gallery wearing a brown cassock and is presumed to be Abbot Robert Hobbes, hanged by Henry VIII, who also haunts the crypt.  In the mid 19th century, a servant the 7th  Duke was drowned by burglars in the lake. Visitors have described a dripping hand touch their faces. Doors continue to be seen opening of their own accord throughout the building.

In 1962, the then Duchess of Bedford, Nicole Milinaire told newspapers of her experiences with the ghost of Woburn Abbey, who she believed to be the Grandfather of her husband,

Sometimes, if he won’t oblige by appearing, I give him a hand by opening doors and rattling things