10 Most Haunted Places In Suffolk 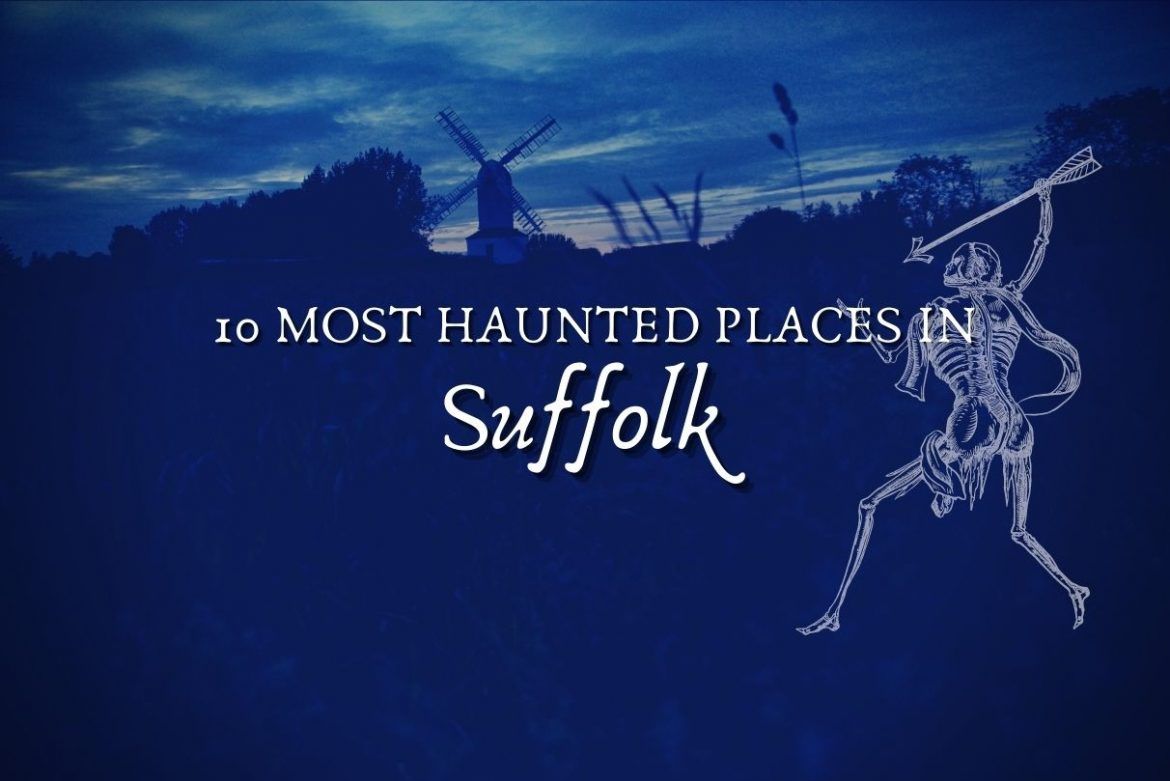 Adding to Suffolk’s quaint and pleasant charm is the fact that Ness Point is the furthest East the UK mainland has to offer, and the first place the sun rises.  Charming it may be, but the records of this county date back as far as the 1st century, and so, too, do the ghost stories of bloodshed, ghouls and hauntings. With a county of a fair few ghosts and haunted locations, discover Suffolk’s most haunted.

Britain’s smalled pub might also be one of Suffolk’s most haunted pubs. Walled up alive for luck in 1844, the now mummified cat hangs in the bar and brings bad luck to anyone who touches it! A landlady who cleaned it was fired. Airmen pranksters who stole it were bedevilled by so many fires and accidents that they quickly returned it. The small spectre of a young boy who died here, perhaps murdered, frequents the bar and is believed responsible for poltergeist activities. A monk in black visits and people scent a phantom woman’s perfume.

Alan Murdie, President of the Ghost Club told the BBC,

“The Cupola House on The Traverse dates from the 16th Century and almost every landlord of recent years has a story. The best is the appearance of the Grey Lady who has been spotted at various places in the town.

One barman was clearing up after closing time and saw a woman in old costume on the stairs inside the pub. He didn’t believe in ghosts but this changed his mind.

We think the Grey Lady is a nun who was involved in a sexual liaison with a monk at the Abbey. This was of course contrary to their vows of chastity and they were punished by their Orders.

There are also reports that she was seen in the Theatre Royal and one former manager used to leave a programme out for her on a seat where it is claimed she was spotted.”

In 1884, Fred Archer, believed by many to have been the world’s best jockey, lost his son and shortly afterwards, his wife Nellie died in childbirth. Two years later while in the grip of a fever, he shot himself in mysterious circumstances, and he was only aged 29.

Within a few years of his death, a mother and daughter saw him riding a white horse galloping along Hamilton Stud Lane near Newmarket. In the years that followed more and more reports came in of Archer riding his favourite horse, ‘Scotch Pearl’ and usually on a dark stormy night. 140 years after his death, people in the local area believe that the ghost rider is still can be seen.

The Bell may be one of the country’s most haunted hotels, said to be haunted by a number of ghosts. Built in 1450, this charming former coaching inn has an original carving of a  ‘woodwose’, reputed to ward off evil, has not stopped the supernatural occurrences recorded here since 1648 after a murder left its indelible mark on the building. A political argument turned nasty and a certain Richard Evered was murdered. While people sought help, his body mysteriously disappeared. He is believed to indulge in poltergeist activity and to haunt Room 4 but with the coaching inn built on a Saxon settlement – maybe it’s something older?

Ghostly sightings are very well known around Ipswich, but one of its most haunted houses in Hintlesham. While its grounds are said to be haunted by a ghostly monk, the house itself has a very strange ghost tale.

While her husband was away, Richard Savage Lloyd II’s second wife ill-treated and starved her step-child, who died soon after he returned. Heartbroken, he had a wax effigy of the emaciated child created and placed where his wife would be constantly reminded of her cruelty. He swore that if the figure was removed, the house and its people would be cursed.

Mary Lewes, in her 1911 book Stranger Than Fiction: Being Tales from the Byways of Ghosts and Folklore, described the figure,

On the landing of the principal staircase of this house there might be seen, a few years since, a glass case covered by a curtain, which, if drawn, revealed the waxen effigy of a child, terribly wasted and emaciated, lying on her side as if asleep. “It was described to me as so realistic as to be quite horrible, and it is apparent that some very strong reason must have existed for keeping so unpleasant an object in such a thoroughfare of the house…covered in later years with a curtain, the effigy remained until a day arrived in quite recent times when the family then in possession were giving a dance, and for some reason had the case containing the wax-work carried downstairs and put in an outhouse.

But mark what happened. That very night occurred a shock of earthquake violent enough to cause part of the house to fall down! Very likely mere coincidence; but as it might have been the working of the curse consequent in the removal of the case, it was thought advisable to restore the grisly relic to its former position, where, as far as my informant knew, it may be seen to this day.”

Haunted Suffolk has many ghost stories of haunted houses, hotels and the like, but it also has a whole haunted town – Dunwich. Storms repeatedly swept parts of the town and its inhabitants into the sea until the 15th century when it disappeared, and drowned beneath the sea. Numerous monks manifest at the monastery ruins and the tolling of church bells from the ocean is said to forewarn of imminent storms. Ghostly sheep and cattle graze, and an Elizabethan sailor boy strolls along the sand. A malevolent Black Shuck, or huge dog, has also appeared.

Manifestations only began at The Swan Hotel in the 19th century, when it is said an unmarried but pregnant young servant girl, abandoned by her sweetheart, hanged herself in room 15.  Her mournful spectre is often seen and it is said she tickled the feet of a nun who was staying there. In 1991, she appeared to a terror-stricken security guard. On the outskirts of Lavenham a mysterious grey lady is also seen and said to walk to The Swan Hotel at midnight – after the sound of ghostly bells have been heard.

Another haunted place off the coast of East Anglia is Languard Fort. One of its ghost tales concerns Maria who was a young Portuguese bride accused of stealing by the other soldiers’ wives. Her husband left the fort to prove her innocence but was shot for desertion on his return. Maria threw herself off the fortress walls. Her distraught ghost still roams, sometimes waking people by whispering  Portuguese in their ears.

During the second world war,  soldiers observing a musketeer patrolling long-gone ramparts were extremely unnerved, as were the military dogs. The only British soldier killed when the Dutch tested the fort’s defences in the 17th  century, is said to appear as a warning when Britain is endangered by overseas powers.

Among the other ghostly figures are a spectral soldier in Victorian clothes who goes in and out of a shop wall, model aircraft kits flying off shelves, a sailor who pushes people and a WWI soldier who cracked his head on the bath and haunts the bathroom. Staff members often work in twos just to ensure they are safe, while cleaning staff will work in one room at a time!

Bury St Edmunds has a fair few ghosts, haunted norman castle and even a ghost tour! The city centre is haunted by a Grey Lady who is believed to be the ghost of Maude Carew, a nun. Killed perhaps because of her involvement in the Duke of Gloucester’s murder in 1771, or perhaps executed because of an affair with a monk. She apparently appears in the Cathedral churchyard annually at 11.00 pm on February 24th.  She and numerous ghostly monks are frequently seen at the Abbey and in the town.

An outraged father of a Crimean nurse who returned with her soldier love, apparently shot the young man as the couple ran down Eastgate Street on October 20th. A Victorian couple has been seen running down Eastgate on that date.

A Mrs Lakeland was duly found guilty of witchcraft and treason and, in a rare example of the time, burned at the stake on Tuesday 9th September 1645. In England, hanging was the usual method of disposing of witches, but because she was found guilty of killing her husband, Lakeland was in fact guilty of petty-treason, and thus subject to the punishment attached to that crime.

The Ghost of Mrs Lakeland is pretty busy in Ipswich, she haunts the shopping centre and staff say that objects move by themselves, disappear completely and then reappear. Nearby is ‘Ancient House’ which coincidentally houses a ‘Lakeland’ store. Since 1997 there have been countless reports of paranormal activity, staff locked in the cellar and slamming doors and much more. Recent research shows that Mrs Lakeland’s husband’s barbershop was within close distance – so maybe this is why she’s so active here?

Rex, the most famous of the numerous phantoms at the haunted pub, was the 18-year-old son of a local clergyman. While still newly married, his wife took a lover whom she would meet at the Tuns. One night Rex killed him and then hanged himself. A permanent cold spot remains where Rex’s shamed father also hanged himself. Recently, it is said, a little girl sobbed, ‘There’s a man hanging there’.