10 Most Haunted Places In Devon 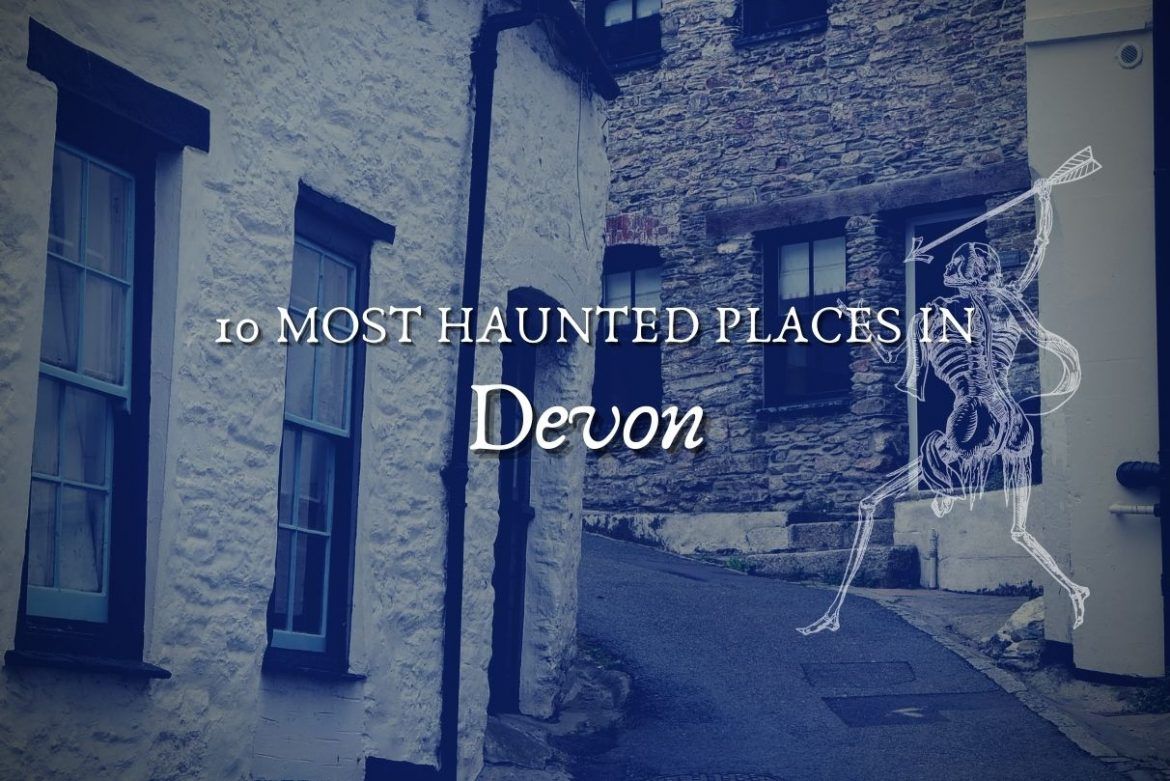 With Dartmoor’s swirling mists and the long-gone famous people who lived, died and murdered here, unsurprisingly the paranormal is very present. The challenge is to find a pub or hotel which isn’t haunted!

Sir Francis Drake bought Buckland in 1580, and although regarded nationally as a great hero, many locals feared him. Some believed he won the Spanish Armada through a pact with the Devil and stories of his supernatural dealings abound.

The Abbey houses the drum Drake used as his call to battle. It was heard beating several times during WW1 and again in 1965. Whenever it is heard, his phantom is said to drive a black coach with headless horses across Dartmoor, followed by black ‘dogs from hell’.

“Take my drum to England, hang et by the shore, strike et when your powder’s runnin’ low, If the Dons sight Devon, I’ll quite the port o’ Heaven, An ‘drum the up the Channel as we drummed them long ago.”

The National Trust’s Saltrum House is a magnificent Georgian mansion and tranquil garden overlooking the River Plym. Like most haunted houses, it harbours a dark secret. The dark, hooded figure which glides through the corridors and disappears through the wall into the dining room is said to be the ghost of a kitchen maid who was brutally murdered in the house. Many researchers have tried to find out her identity, and indeed the killers, but to no avail.

A silent, phantom child has also been seen either rising out of, or sitting at the bottom of a bed before disappearing.

In 1865, repairs to the manor led the occupant to suspect a secret chamber. Breaking through a wall, he found a woman’s skeleton on a four-poster bed. Legend says a man called William Oatway rescued the dying woman after a shipwreck in the 1700s. She died that night, but the riches she had with her could fulfil his dream of buying Chambercome Manor.

Deciding to keep the gold, William denied seeing her when a shipping agent came knocking and he later bricked up the room. Some stories say that it was his daughter Kate, who had sailed from Ireland to visit. Whoever she was, her moans and ghostly footsteps are still heard.

In 2008 I organised a ghost hunt at Chambercombe Manor, while on the history and hauntings tour I took the attendees to a bedroom on the second floor and began to talk about the legend of Kate Oatway. Suddenly the old lock on the door next to me began to rattle violently causing myself and the others to jump. For about ten seconds it clinked, clinked, clinked, so I grabbed the door and opened it, and no one was stood there. I checked the front door of the house to see if it was wind or a vaccuum but I couldn’t replicate it that night or the many times since I visited.

The ghost of young ‘Ellie’ with ringlets and a blue dress appears in the Chippendale Room where she amuses herself by tweaking visitors’ clothing and two little ghost girls were sighted in 2019. People also experience perfume coming from nowhere, doors inexplicably opening and closing, an oak cradle rocking itself, a pacing, angry man and invisible hands caressing them.

The skeletons of a baby and a woman were found behind a wall during renovations. Some say the baby was murdered by a daughter of the house after she’d been violated by her father. A woman’s ghost and a baby’s crying haunt the castle. Other spectral ladies wander here, but time has confused their identities.

Screaming and clamorous noises are heard at Pomeroy’s Leap, where two Pomeroy brothers in full armour reportedly rode to their death to avoid being captured by enemies. Berry Pomeroy is a wonderful, atmospheric castle to visit and well worth checking out.

This obsolete cinema in Derry Cross was built on the site of a former theatre which, had multiple graveyards beneath it. The entire area experiences significant paranormal activity.

‘Emily’, an actress who took her own life in a theatre dressing room, is seen wearing 1940’s clothes and sitting in ‘Screen 2’. Elsewhere, a young man wanders around and sits down, but although the seat drops, there is nothing there.

Apparently captured on CCTV,  Agatha Christie’s books, amongst other things, have been flung off shelves and tiny fingerprints appeared inside the case of a mummified 4 year old boy which hadn’t been opened for 10 years. The resident phantoms manifest regularly, with stunned visitors seeing one vanish into a bookcase. Two photos taken here appear to show the ghosts of an attractive young servant girl and a woman veiled in white.

The Coach and Horses, Buckland Brewer

The 13th Century thatched Coach & Horses Inn at Buckland Brewer in North Devon is set amongst the beautiful Devon countryside with Exmoor and Dartmoor only a short drive away. Like many inns in the distant past, this pub also served as a courtroom and place of execution! The ghosts of two cavaliers are said to sit in a corner, while a spooky lady dressed in black is said to roam the pub.

Originally built in 1106 by order of Henry I, Tiverton Castle is one of the most historic and haunted locations in Devon. For many years, it was the home of the medieval Earls of Devon and even a Plantagenet Princess.

The main and most well-known haunting of the castle is the ghost of an 18th-century bride who accidentally locked herself in a wooden chest while during a game is said to haunt the castle. After a fruitless search, it was assumed she’d run away to avoid marriage and her mummified body was found years later. Visitors have seen her wandering around in her bridal gown.

Another story is of beautiful Alice who was to be married to an older, cruel man, Sir Charles Trevor. Her handsome love, Maurice Fortescue, struck Sir Charles for gratuitously killing his beloved dog, Vulcan. Sir Charles demanded a duel and killed him before kicking his body into the raging river. Alice jumped into the river after Maurice and drowned. Since then, whenever the Exe runs high, their happy ghosts link arms and walk, with Vulcan at their heels.

The de la Pole family bought the manor from the ruined Grey family in the 16th century after Lady Jane Grey’s execution. The ghostly lady in grey who haunts this property is said to be Lady Jane Grey herself,  but others claim it is the ghost of a Royalist Pole who was hanged from a tree during the Civil War. She is said to return to the spot called ‘Lady’s Walk’, but quickly vanishes. Looking purposeful, she is reportedly at home in the manor grounds.

The nearby one-ton stone, which legend says was dropped by the Devil is turned over annually by villagers to prevent bad fortune.

A night in room 8,  you may find your bedclothes being pulled off and pictures moving. Loud footsteps, knockings on doors, giggling, windows flying open, taps turning themselves on – this pub has them all! The bar is often visited by the ghost of an RAF pilot who died there, too.

More Articles About The Ghosts of Devon