In my article about The Ostrich Inn being haunted by “Britain’s first serial killers” – see here – I discovered that The Ostrich Inn’s hauntings are based on a fiction novel called “Thomas of Reading” by Thomas Deloney.  Written in the late 16th Century and published as a chapbook in 1632, one of the novel’s chapters details the murderous innkeeping Husband and Wife – “The Jarmans” and how they slaughtered Thomas Cole in a pub called “The Crane”.  The novel concludes with the murderers being discovered and the King requesting that The Crane be demolished.

Several TV shows have visited The Ostrich Inn looking for the ghosts of The Jarmans and their unfortunate victim, so Most Haunted weren’t alone in their mistake.  However what intrigues me is that during the TV show Derek Acorah, a psychic medium claimed to be in communication with The Jarmans and their victims.

For reference I am using this video from YouTube as my first reference. Not only does it show scenes in the original broadcast of the Most Haunted investigation of The Ostrich Inn but also deleted scenes added for the DVD release.

After the initial retelling of the fictional story, Derek Acorah appears at 6:03min to case the joint. Actually no, to relate what he is sensing from the location and also elaborate on the feelings of the ghosts of the location.  By 7:21 Derek is partial trance, or at least claiming to feel the effects of the “spirit” around him. At 8:20 Derek shouts “THOMAS!” exhilarated at ‘hearing’ Thomas’s voice, Derek continues the alleged communication.

“I was running! I was running! He was coming after me and…I hid,” claims “Thomas”.  Apparently “Thomas” was garotted, his last memories were of “not breathing” but “he wasn’t aware of the water” says Derek but how did he know that water was there? Very strange statements.

In this next video, Thomas and The Jarmans both communicate with Derek, just in case you forgot – they are characters from the FICTIONAL NOVEL “Thomas of Reading” written by Thomas Deloney before his death in 1600.

As stated previously Thomas Cole is the final victim of The Jarmans in the fictional novel. 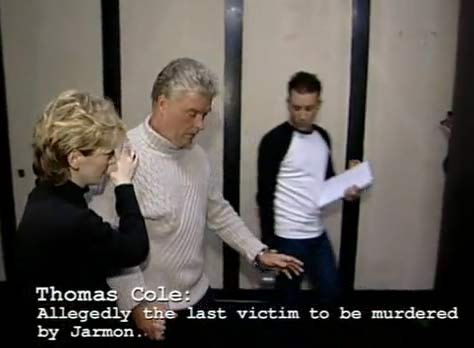 At 2:38 with the guidance of Sam says, “A Trap…there’s a trap but this has changed. This isn’t how it should be.” Derek points to the floor, and then with the help of Sam claims that they didn’t leave through the doors, but through to the ground – insinuating there was a trapdoor.

At 6:26, Derek enters the kitchen and exclaims, “A lot of souls lost their lives here. A lot of poor, innocent and I use the word very, very strongly, innocent souls.” Derek continues to claim that he has slid into liquid and he can’t get out. Gasping he says, “A big tub, I’ve come into this…I’m burnt..”  Sadly at this point Derek passes out, but after gentle coaxing and rubbing of his shoulder he says, “Get out of the water, I can’t get out.”

In the fictional novel “Thomas of Reading” the account of Thomas’s death is as follows; “they had listened at his Chamber-Doore, they heard the Man sound asleepe: All is safe, quoth they, and downe into the kitchen they goe, their servants being all in Bed, and pulling out the Yron Pins, downe fell the Bed, and the Man dropt out into the boyling Caldron.”

Again remember that this fictional novel is first reference to the Jarmans and the use of a cauldron to boil their victims to death. There are no references to a very, very important man such as Thomas Cole being discovered murdered or by these means.

“Who’s has lifting you out?” asks Yvette Fielding.

At this point the video continues here

Derek continues following the thread of the fictional novel “Thomas of Reading” where the Jarman’s boiled people alive and stole their victim’s belongings due to debt.

In ‘trance’ Derek says “I’m James Henry..she’s, she’s taken my money..the old woman..his wife..hidden it…he’s walking around with that smirk on his face…Jarman!”  There are no references to James Henry in the novel, but Derek continues the narrative claiming that the old Jarman woman is stealing money and belonging, storing them in a cupboard. A little later at 3:48min Derek claims that the valuables “carry instant karma” and that “it will stay for all time” – as if the items were cursed.

Again in the original novel there is a reference to the location being cursed – where ever Derek obtained his information it seems he misunderstood the use of the term curse.

“They deserve to be executed!” Under trance and sounding like a tie-fighter from Star Wars, Derek continues the “Thomas of Reading” narrative with the execution of the Jarmans. “We all stood and applauded….Jarman.”

Here is the original reference to the capture of the Jarmans from the book; “Then the Woman being apprehended & examined, confessed the Truth. Jarman soone after was taken in Windsor Forest, he and his Wife were both hangd, after they had laid open al these Things before expressed. Also he confessed, that he being a Carpenter, made that false Falling-Floore, and how his Wife devised it. And how they had murdered by that Meanes (many) persons. And yet, notwithstanding all the Money which they had gotten thereby, they prospered not, but at their Death were found very farre in Debt.”

At 7:19min Derek claims that in the loft is “the history book” published in 1632 – the programme’s titles then claim; “Published in 1632. The book holds accounts of the alledged (sic) murders at the Inn.”

Actually the only account is that of Thomas Cole’s demise, and secondly it wasn’t a history book! It is a collection of fictional novellas by Thomas Deloney. So what are we to make when Derek Acorah under trance and the programme get this information wrong – are they both reading the same wrong references?

Then for the next six minutes look for a copy of the “history book” in the rafters of The Ostrich Inn – later Derek claims that if this “history book” was found all negative energy would cease at the venue.

Based on the extended version of Most Haunted’s investigation at The Ostrich Inn, my conclusions are as follows:

1. Firstly the location of the Thomas Cole murder and The Jarmans was “The Sign of the Crane” which if we are believing a fictional novel to be real – was actually demolished on the King’s orders.

3. Derek Acorah’s trance with Thomas Cole had to be faked. Thomas Cole is a legendary character associated with Reading and linked with the myth that Edward I/Henry I created the yard measurement. Thomas Deloney used Cole’s legend to enhance his story. With no other written record of Cole’s murder (which had to be in the 1100s) how can Deloney’s book four hundred years later be the only reference to this misdeed?

4. Derek Acorah’s communication and trance with “James Henry” was faked. “James” claimed to have fallen through the floor into a “tub” of water. In the same room Derek claims the room has been changed and that at one time there was a trapdoor. As I prove above The Ostrich Inn and The Sign of the Crane are two different buildings, somehow over time the story has moved location. Since “The Hospice” was standing in the time of Deloney – why didn’t Deloney use this name if it was true?  Putting it simply – why would a medium be in communication with a fictitious character in the wrong building?

5. “The History Book communication” is fake and opens up the possibility that both the programme makers and Derek Acorah misinterpreted “Thomas of Reading” as a history book. Since there are only a handful of the original 1632 publication left in the world, to find one stuffed in the side of the rafters would have been amazing. Nothing was found.

6. All of my research points to that Derek Acorah had pre-researched or was given information about the location before the programme. Both the programme makers and Derek Acorah make serious mistakes in the information they give to the viewer. Since this is only series 1 – how can you trust anything you saw in Most Haunted being “real”?

The Ghost Bus of Kensington