Too Scared to Read?

I’ve reached a milestone birthday recently and with the advent of writing my first major book on ghosts, it’s made me address my early influences and how they’ve shaped my approaches to paranormal investigation. As I review these influences I’ll update my blog and share them with you.

After reviewing some of the books that I’ve had for over thirty-two years, I began to realise how at an early age I would become “stuck” on certain things, whether an illustration or fact. It made me realise even at the age of eight that when I become passionate about something that I give 110% and won’t stop until its finished. All this time later I’m still heavily involved in the research and investigation of the paranormal, and I’m often asked what interests I have beyond the subject – I don’t, paranormal is my life… My family didn’t have a great deal of money when I was younger so a lot of the time I would pick up books and toys from jumble sales and bric-a-brac stalls. One of the first ghost books that I purchased was Ghosts, Ghosts, Ghosts.

At first I couldn’t even open the book, I was just too scared to read – another book at the sale put paid to that in its back cover text; “Dedicated to the ghosts who would appear in my bedroom”. I’ve still not tracked down that book that so frightened me.

Ghosts, Ghosts, Ghosts is a selection of ghost stories often featuring young adults or children. The first story “Jimmy takes vanishing lessons” is an exciting story of a ghost teaching Jimmy how to do ghostly things such as trying to walk through walls (tried it and it didn’t work) and “how to glare with fiery eyes, which was useful later on when Jimmy became a doctor”.

Seemingly to a young child the stories became more and more macabre with “Dead men on parade” detailing an ocean dive in which the currents stir up the bodies of dead sailors.

What struck me at the time was that a few of the stories seemed very real indeed “The Water Ghost of Harrowby Hall” and “The House of Ocean Born Mary” being standout stories. In “Ocean Born Mary” the conclusion to the story ends very much like a paranormal investigation and discusses evidence gained by mediums, loose ends still untied to haunt on. 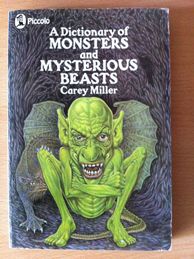 If the stories weren’t horrific enough to an eight year old boy, the illustrations by Manning de V.Lee are incredibly atmospheric and really set the scene for each story.

A Dictionary of Monsters and Mysteries Beasts

With its gruesome grinning green monster, this book introduced to me the world of mysterious creatures and monsters. Already a fan of dinosaurs, which five year old isn’t? I discovered this book at a school fair and didn’t look back. From Vampires (the illustration looks like a fat Ray Reardon) to Iroquois Lake Serpent (Champ?) the book gave me a window into a world that I didn’t realise existed (or not). Sadly as a paranormal investigator I’ve only investigated had chance to investigate two monster sightings but that’s better than none..

In the second part I’ll discuss the “Usborne Pocket Books” and their role in influencing me and my generation. In the meantime why not checkout my article about Christopher Lee and how he interfered in my life – http://www.spookyisles.com (appears 27th May)