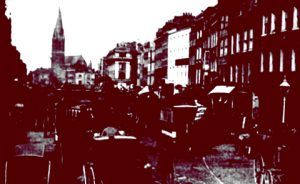 I won’t ever investigate the Jack the Ripper case in any real depth,  although it seems that anyone interested in the paranormal has more than a passing interest in the JFK assassination, Jack the Ripper and other populist mysteries. My reasoning is very simple, although I know the mystery and enjoy its complexities, I just think I can’t or won’t bring anything new to the table. However it didn’t stop me looking a few contemporary newspapers to gain an idea of what the “fields” were like during that time.

Over the years I’ve built up a very loose theory that fields exist within certain communities. These fields I believe are created, enhanced, bred and manipulated by people’s collective beliefs of the area.

An area will become polluted by belief and seemingly only the community’s destruction will have any impact on the field’s strength and longevity.

Whitechapel certainly seems to have a field of weirdness and murder and may always have done. I’ve not researched Whitechapel far enough to understand the mindset of the populace of that time. However there are indications that from early establishment Whitechapel was always going to be the place where Jack the Ripper would strike. (A manifestation of belief manifesting a belief?)

The Western Gazette, December 7th 1888, nearly a month after the Mary Kelly murder printed a story about the weirdness murder field of Whitechapel.

“A telegram from New York to the Daily Telegraph states that in Boston the Whitechapel fiend has been imitated by a man who hides in dark corners and darts out at women, brandishing a knife…He is undoubtedly insane and the police are “arresting him numerously.”

The article also details the arrest of a suspect in Mile End who was later released after giving a satisfactory explanation. Then the weirdness kicks in..

“Another outcome of the Whitechapel horror is a Chinese ghost, with the face of a dragon, which appears in Pell Street. He is said to frighten women in the area.”

So far I’ve not found any details of the Chinese ghost of Whitechapel, but what inspired a hoaxer (if that is what it was) to dress up as a Chinese ghost with a dragon mask?

The Pall Mall Gazette October 8th 1892, discusses four years later the discovery of three skeletons alleged to be the remaining evidence of a series of murders that took place twenty years previously. Found on vacant land between Commercial Street and Flower and Dean Street, the ground was known to contain ancient cesspools and cellars. A wooden box was found with a well-preserved human being inside, however on further examination the box harboured three bodies in total. I’m unsure if researchers know about a series of murders in the early 1870s but if anything it shows again links to the Jack the Ripper case. (Collective belief in serial murders in the area.)

If we step back to 15th October 1842, reports reach local journalists about a ghost appearing in St Mary Matfelon Whitechapel churchyard.

“The immediate neighbourhood….has for several nights been the scene of considerable excitement, and vast numbers of the lower orders have for the last week been congregated every evening just as the hand of clock neared the hour of eight, an absurd rumour having got into circulation that exactly as the clock struck that hour, a ghost in “snow-white apparel” was to be seen stalking across the churchyard. On Sunday evening so dense was the crowd that it was almost impossible for a person to pass along”

The conviction that Whitechapel churchyard was haunted continues for many years until September 1863 when the body of a murdered child is found in the belfry. After the discovery the rest of the church and the roof was searched and in total eleven coffins were found, three of which contained bodies of children. In addition to the remains about seven skulls of children were found and they were strained with blood. It was estimated at that time that the bodies had been placed there over a forty-year period with the last one only being dead within the last twelve months.

The inquest uncovered an illegal operation with a number of church staff taking money for false burials. If this was the case it seems to suggest that the strangeness taking place outside of the church was related in someway to the restless spirits of those hidden in the church roof. Had the belief of the perpetrators that they were doing something wrong or that the souls of the dead would be restless, actually lead to the weirdness field creating the “snow-white apparition”?

The cases continue to rack up with mass-murders, strange dreams, premonitions, ‘strange men sightings’ and the building of myth of Jack the Ripper.

Whitechapel over the years built up its murder and weirdness field, its 14th century church St Mary Metfelon (Meet Felon) giving the area it’s name and standing proud as a beacon of strangeness until its destruction by German forces during World War 2. By the time of the Ripper murders the church was in its third incarnation, after being burned down in 1880, just three years after being rebuilt. Is it really coincidence that Charles I’s executioner Richard Brandon is buried in its churchyard? In the late 19th Century the weirdness began to manifest itself in premonitions of the Wainwright and Jack the Ripper murders, the unburied souls of St Mary’s began to leak from their coffins and modify the minds of men and finally after two false starts in 1842 and 1875, the impenetrable murders of six (two x three) prostitutes became its highest accolade.

* One of St Mary Matfelon’s origin stories places it in the hand of a French Murderer. In about 1428, a devout widow of Whitechapel was murdered by a man who was French or Briton born, after killing the woman in her bed he fled with jewels and “other stuff of hers”. He was chased to the Church of St George in Southwark and challenged Privilege of Sanctuary. Unfortunately for him he was arrested and the next day taken back through Whitechapel where “the Wives cast upon him so much Filth and Ordure of the Street, that (notwithstanding the best Resistance made by the Constables) they slew him out of Hand.”

The way in which the murderer was treated by the constables and the people of the parish persuaded the religious authorities to establish the church in the name of Mary Matfelon (Mathefelon being a French name). However there is an earlier record dating from Richard II (1367 – 1400) of a “Villa beata Mariæ de Matfelon” in the area.