“The dead, shrivell’d hand, as she clasps it with glee
And now, with care,

The five locks of hair
From the skull of the Gentleman dangling up there,

With the grease and the fat
Of a black Tom Cat

She hastens to mix,
And to twist into wicks,

And one on the thumb, and each finger to fix.
(For another receipt the same charm to prepare,
Consult Mr. Ainsworth and Petit Albert.)

Nor move, nor swerve
Joint, muscle, or nerve,

At the spell of the Dead Man’s hand!
Sleep all who sleep ! Wake all who wake!

But be as the Dead for the Dead Man’s sake!” 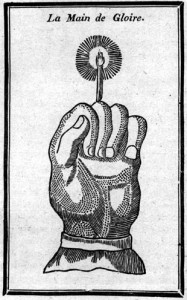 The passage above is taken from R.H.Barham’s “The Ingoldsby Legends” (1840) a collection of folklore stories told in rhyme. It’s first story introduces the reader to the mysterious “Hand of Glory”. Although witches were supposed to make and use the Hand of Glory for their own dire needs, it was an in fact a robber’s charm that would enable the user to break in to property undetected without fear or discovery.

The witch or sorcerer would cut off the hand from the fresh corpse of a hanged or gibbeted man and wrap it in a shroud. Preferably the hand was cut off during the eclipse of the moon. Afterwards it was wrapped in a shroud, squeezed of blood and pickled for two weeks in an earthenware jar with salt, long peppers and saltpetre. Then it was either dried in an oven with vervain, an herb believed to be able to ward off demands, or laid out to dry in the sun, desirably in the hot dog days of August.

To enable to work its ways a candle had to be made. Ingredients included the fat of a murderer, virgin wax and “Lapland Sesame”, in “Witchcraft, Magic and Alchemy” (1931) the author gives sesame and “ponie” as ingredients, although “ponie” is of unknown significance today and may have been manure.

When the hand was ready, candles were fitted on it between the fingers. These were called the “dead man’s candles” were made from another murderer’s fat, with the wick being made from his hair. (Another method of curing the severed and dried hand was dip it in wax. After this process the fingers themselves could be lit.)

Once the candle was finished the robber would remember the Hand of Glory incantation and would be on his way.

It is late October 1797 and the landlord, George Alderson is preparing to retire to bed now the customers have long one into the stormy night.

Suddenly a loud banging interupts his routine and George sends the servant girl to open the door. There before her stands a bent old woman dressed in a long cloak and hood that hide her features. The wind howls and blows the woman’s clothing (that would pass for rags) around her frail, bent body. The woman begs to be let in and rest from the fearsome stormy night outside. George was unwilling to turn the woman away and let her stay for the night by the fire with the servant girl.

As the old woman lays before the fire her cloak rises to reveal heavy riding boots. Instantly the servant girl becomes suspicious and decides to keep an eye on the stranger.

Later the stranger peeks to see the servant girl asleep and throws back “her” hood to reveal the hardened face of an embittered face of a robber. Out beneath his cloak the robber reveals a shrunken, withered hand and places a candle between its stiff bony fingers and lights it.

The servant girl pretends to be asleep, keeping very still and hears the thief begin his spell.

The thief finished his incantation and the candle grew to an intense, brilliant light. The man withdrew the heavy bolts on the large oak door and whistled to his gang.

The servant girl jumped to her feet and threw herself at the robber, hurtling him into the dark. Before he could regain his feet the maid locked the door and ran upstairs.

For what seemed an eternity she bangs on her master door but there is no response. As she enters she realises that her master is in a trance.

Remembering the hand was still lit she runs downstairs and pours a jugs of milk over the hand’s eerie light – spell broken!

George and his son, awakened from their deep sleep came running downstairs with guns in their hands.

“Go away or I’ll shoot!” shouted George to the thieves.

The thieves began to circle the coaching house and George’s son fires towards the noises in the night.

“Gives us our Hand back!” exclaimed one of the thieves.

In reply George and his son fired into the dark sending the robbers away.

The next morning a pool of blood was found outside and later the whole gang was caught.”

And so the story goes but is there any real evidence that such an item actually existed? From an occult perspective the grimoire “Petit Albert” (1668-1782) is the first reference to creating such a charm. This publication entranced readers across Europe and no doubt inspired “The Ingoldsby Legends” author Barham (who mentions it by name). Subsequent grimoires, possibly to enhance their credibility, copied wholesale the “Petit Albert” recipe, with some adding new incantations. An obscure earlier reference also exists but this relates to possibly a mandragora root (“Mandragora” closely resembles the French phrase “Main de la Gloire,” meaning “Hand of Glory”). There are no records or evidence of any would-be magickian actually creating a Hand of Glory, which is hardly surprising since the last Witchcraft trial in Britain was 1944.

Considering the lack of evidence of such an item existing, strangely, two “real” hands exist, in Whitby and Walsall in their museums. The Walsall hand comes from The White Hart, Caldmore Green, “In the latter part of the nineteenth century The White Hart was renovated, and, during the work, a child’s arm was found hidden in an attic chimney. The arm has become known as the ‘Hand of Glory’, traditionally a hand cut from a hanged felon and dried in the prescribed manner…This grisly object, now on display in Walsall Museum, seems to be a medical specimen, dissected by a surgeon and injected with formalin to preserve it. It certainly does not date from the time when the house was first built. However, popular legend refuses to accept such a dull solution”

The Whitby Hand of Glory can also be seen in the town’s museum. The mummified severed hand was discovered in a wall in the North Yorkshire village of Castleton by stonemason and local historian, Joseph Ford. Immediately he believed it to be a Hand of Glory and in 1935 it was given to Whitby museum. Sadly, the Whitby specimen is equally disappointing as the Walsall hand – aside from it being mummified there is no indication that it was soaked in saltpeter or even used as a candle – it is literally just a hand.

The likelihood is that Barham, the author of Ingoldsby Legends had read “Petit Albert” or at least read references to the creation of the Hand of Glory and placed it within the context of his book. Again based on the reference to “Ainsworth” in his poem, he must have read William Ainsworth’s “Rookwood” a popular novel from 1831 that also included a rhyming couplet about the “Hand of Glory”.

“From the corse that hangs on the roadside tree
A murderer’s corse it needs must be,
Sever the right hand carefully:

Sever the hand that the deed hath done,
Ere the flesh that clings to the bones be gone;
In its dry veins must blood be none.

Those ghastly fingers white and cold,
Within a winding-sheet enfold;

Count the mystic count of seven:
Name the Governors of Heaven”

Barham must have witnessed the success of Ainsworth’s Rookwood and set about writing his own book set in North Yorkshire. Highly influenced by local folklore, Barham created a timeless story that is often quoted as an historical anecdote, when the sad truth that outside the fictional realms of Ingoldsby Legends, it is doubtful that a Hand of Glory was ever created and used.

Who was the Croglin Vampire?

[…] second claimed hand exists at the museum on Walsall, a large market town in the West Midlands. Like the Whitby hand, it […]

[…] second claimed hand exists at the museum on Walsall, a large market town in the West Midlands. Like the Whitby hand, it […]