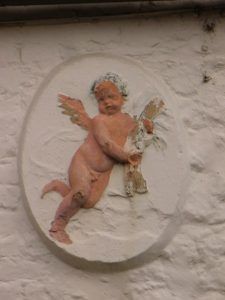 Saint Rumwold (often spelled Rumbold) is a curious saint that beggars belief, however its an interesting tale that has grown and spread across England over the last thousand years. Rumwold was born in 662 and is said to have lived for three days. From the moment of his birth he was able to speak – proclaiming within hours “Christianus sum, christianus sum, christianus sum” (“I am a Christian, I am a Christian, I am a Christian”), and then requesting a baptism before delivering a sermon prior his premature death. At the moment six churches are dedicated in his name and his cult has spread from his alleged birth place of King’s Sutton in Northamptonshire to Buckinghamshire, Lincolnshire and even North Yorkshire.

While I won’t explore his genealogical background but will mention a couple of places that hold strong links with him.

Boxley Abbey, famed for the notorious Rood of Grace incident (the monks claimed the wooden cross had a figure upon it that could move and speak. It was destroyed in 1538 when the Bishop of Rochester discovered it was a fake moved by levers and wires to enact “miracles”) also had a very famous portrait of Saint Rumwold. According to local tradition the portrait had miraculous powers including the testing of a woman’s chastity as well as gaining and losing weight dependent on who lifted the portrait. Those who paid the priest well could lift the portrait with ease. Sadly similar to the Rood of Grace, it was claimed that these miracles were operated by an unseen person standing behind portrait.

In Buckingham (where the saint wished to be buried) there is the old Manor House situated in the old town. One of the oldest buildings in the town, the Manor House is an attractive Elizabethan half-timbered building.  On the side of the building is a carved infant cherub, said to be the representation of St Rumbold (see above). Further connections with the saint continue in the town, a few feet away from the Manor House is the Old Churchyard, the site of a medieval parish church that once stood the Shrine of St Rumbold.

I am always asked how can someone so associated with the paranormal enjoy researching saints? St Rumwold is one good example of belief with fortean tinges, we have a talking baby, alleged miracles and blatant fakery – what isn’t there not to love? Get exploring!